Have you wondered what it was like shooting portraits with the Sony 35mm f1.4 Zeiss lens?

I was wondering myself, so I got a copy of the lens and put it to the test. Here’s my quick overview of the results from my real-world shoot with Holland.

I got sharp images and high-quality details when shooting portraits with the Sony 35mm f1.4 lens. The wide 35mm focal length allowed for capturing more of the environment while staying close to my subject in comparison to a 50mm or 85mm. The f1.4 aperture gathered plenty of natural light as I shot indoors and outdoors with no external flash.

I enjoyed the overall performance of this lens and look forward to shooting more with this focal length in the future.

That pretty much sums up my review of the lens, but if you’re interested let’s dive deeper into the details of this shoot with Holland and breakdown why I chose the 35mm lens for portraits.

It’s always a great feeling when you get your hands on a new lens, especially when that lens is the Sony 35mm f1.4 Zeiss Distagon FE Lens (long name for sure).

The Zeiss badge brings a certain amount of recognition as they’re a huge name in the optics industry, so I had high expectations when using this lens.

The Sony 35mm f1.4 is a lens I’ve been wanting to use for some of my lifestyle shoots. This would allow me to stay close to my subjects but still get plenty of background details.

This is the reason it’s called the “story-teller lens”.

The lens was larger than I expected when mounted to my Sony a7ii mirrorless camera.

I was shooting with no camera grip, so it made the camera feel a front heavy with the lens mounted. It’s not a bad combination, but it does feel unbalanced at times.

You really notice this when trying to shoot one-handed.

This won’t be an in-depth technical review of the lens, so I won’t get you caught up in the specs. My goal is to show what this lens looks like for shooting portraits.

This model test shoot was with Dallas area model Holland at a small studio in downtown Plano, TX.

I met her and her mother on Instagram and we were able to collaborate on a test shoot with a few other models and photographers on location.

I knew the studio was small, so I wanted a wider focal length over the traditional 50mm or 85mm.

I knew my space was going to be limited so I planned for this ahead of time. I kept my Sony 55mm f1.8 in my camera bag just in case I wanted a different focal length.

Why choose the Sony 35mm f1.4 for portrait photography?

What I disliked about using the Sony 35mm f1.4 for portrait photography

My camera for this shoot was the Sony a7ii mirrorless camera. I had the camera for about a year and was pretty good at using it for portraits.

I used single shot mode and single point auto-focus to keep my portraits looking tac sharp. I always put the point over my subject’s eyes so get the best results.

This camera is a few years old now, but I still believe you can get some great results from the performance of this camera.

If you have the money, I will even recommend upgrading to the award-winning Sony a7iii.

The f1.4 aperture came in clutch when shooting in the studio. The windows were frosted over, and it was a cloudy day outside.

This overcast created a beautiful soft light outdoors, but it also limited the amount of strong light hitting the windows and coming into the studio.

I kept the aperture at f1.4 to maximize light hitting the sensor while being able to keep the ISO settings low.

With that, I knew I was going to keep an eye on my distance to the subject. Shooting with such a shallow focus area, I knew I could run into problems.

My goal was to keep both eyes facing me as much as possible but I also kept my distance from Holland so I could get more in focus. 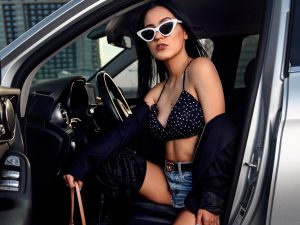 How did the Sony Zeiss 35mm f1.4 perform

Holland was moving moderately fast and changes poses after each camera click.

I was using single shot mode for most of the shoot indoors and then moved to continuous focus when we moved outdoors.

The Sony 35mm f1.4 lens kept up with focusing during the entire shoot.

I did have some shots that were out of focus, but I think these were because I was shooting at a lower shutter speed before moving it up.

General autofocus of the Sony 35mm f1.4 was quick for this shoot. Even when shooting in the lower light areas of the studio and hallway, I was able to get shots fast with no major auto-focus issues.

I’d be interested to see how well this lens works on the Sony a7iii or a7riii. I have no doubt it would be just as fast with the newer sensors.

Is the Sony Zeiss 35mm f1.4 too wide for portraits

No, a 35mm is not too wide for portraits. With this focal length you will need to try to keep your subject in the center of the frame as much as possible.

The edge distortion will exaggerate their features so keeping them in the center will make for better quality shots.

Some photographers look use this distortion to their advantage and make subjects look longer and taller.

Every photographer has a different idea of traditional portrait focal lengths. Some prefer longer telephoto focal ranges like the 85mm or 135mm, or even the 70-200mm.

Shooting with a wider focal length provides its own advantages and drawbacks but this has never stopped me shooting portraits with a 35mm.

The Sony 35mm f2.8 lens is a lighter and more budget friendly option if your considering other lenses.

You can also review other options from Tamron and Sigma as they have expanded their line-up of prime lenses for the Sony e-mount system.

What did I learn from this portrait shoot with the Sony 35mm f1.4 Zeiss lens

How did the Sony a7ii perform with the Sony 35mm f1.4 lens

The combination of the Sony a7ii mirrorless camera with the Sony 35mm f1.4 lens was a solid one.

The ISIB featured in the Sony a7ii helped stabilize my shots when I needed to slow down the shutter and collect more light.

I shot with the Sony a7 for over a year before upgrading to the Sony a7ii and I will tell you there is a large difference.

Both are great cameras, but I would prefer the IBIS feature in my camera since I shoot and move quick.

The Sony 35mm f1.4 is a big lens, and a strong lens for photographers. It’s built like a tank and provides excellent quality shots especially for environmental portraits.

You can stay close to your subject or move back and really capture the setting they are in with your composition.

There are other options to consider so only you can decide if this lens is right for your work. Make sure to check it out and give it a chance against the other competitors on the market.

Read More
If you’re like me, you’re constantly testing new lenses. I carry prime lenses for my portrait shoots, but…
Read More 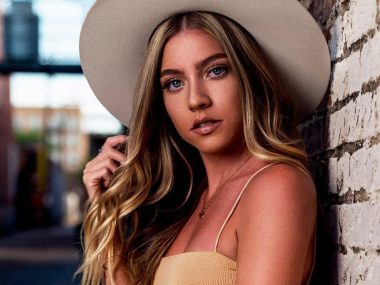 Read More
When I first started taking portraits, I did research on prime lenses and zoom lenses. The experts all…
Read More 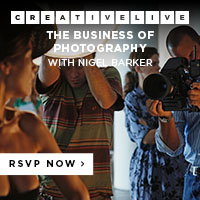